The TM Racing Factory Team Moto3 sets itself new ambitions and new goals, the squad now fully managed by the Italian firm. A significant commitment, both operational and financial, made possible thanks to collaboration with the sponsors that support TM in this project.

The aim is to continue developing the Moto3 with the ongoing work of an increasingly competitive team, in order to keep pace with the strongest international competitors. In order to further develop the TM Racing Factory Team Moto3, former Italian 125 champion (2009) Riccardo Moretti joins the ranks and will harness all his experience in his role as Sporting Director.

The team will compete in the FIM CEV Repsol Moto3, or rather the Junior world championship, which serves as a gateway to the Moto3 world championship. The three riders tasked with exploiting the potential of the Italian bike are Nicola Fabio Carraro, Raffaele Fusco and Spaniard David Salvador Gomez. Before the opening round, which took place at Estoril in Portugal last weekend, the three riders completed a winter test programme that comprised two days at the Albacete track, one at Valencia and two at the same Portuguese track that hosted the season-opener.

The first round of the FIM CEV Repsol Moto3 championship proved very positive, with David Salvador crossing the line in second place. Fusco unfortunately suffered a crash, while Carraro raced despite the fact he is still recovering from a broken collarbone, an injury he sustained while training.

The next round of the FIM CEV Repsol Junior Moto3 world championship will take place at Valencia in Spain over the weekend of 8-9 May.

Mattia Serafini – Team Manager TM: “The Estoril round was problematic due to the changeable weather and track conditions. David was quick right from practice, and scored second in both qualifying and the race, demonstrating excellent potential. Carraro unfortunately fractured a collarbone while training and had to have surgery. He raced in Portugal anyway, in order to regain confidence with the team and the bike, but he wasn’t able to fully express himself of course. Fusco was unlucky, a crash ruling him out of Sunday’s race, though fortunately without serious consequences. Overall, we had a positive weekend. The bike has proved very competitive and this bodes well ahead of the next races”.

David Salvador Gomez: “It was a very positive weekend. I worked well with the team and in the end we scored a good result. I rode in all conditions, but luckily Q2 took place in the dry and I was able to score a front row start, second, which was the goal we’d set ourselves. In the race I made a good start and was able to race as part of the leading group. There were five of us and we battled it out right to the end. I finished second and, as it’s only the first race, I think it’s a solid result. We still have ample room for improvement and I think we can do well at Valencia, as it’s a track I like and one that suits the characteristics of our bike”.

Raffaele Fusco: “The weather made for a strange weekend. Practice and qualifying ran in ever changing conditions, wet, damp, and dry, and in these conditions, it wasn’t easy to find an effective set-up. I started from the sixth row, in seventeenth place, and was starting to make up placed when I made a small mistake on lap five and crashed. A real stroke of bad luck because both me and the bike were constantly improving, and I could have achieved a good result. We’ll try to make up for this at Valencia, a track I like and when I set some very good times during the winter tests”.

Nicola Fabio Carraro: “In my condition, I couldn’t risk a crash, and so I had to put the brakes on over this Portuguese weekend. Despite my fractured collarbone and the plate I’ve had inserted, I still wanted to be present at Estoril and work with the team to find a good set-up for my bike. I couldn’t take part in winter testing and so this was my first contact with the bike since the last CIV race at Vallelunga in 2020. The weather conditions definitely didn’t help me, and so I was pleased to qualify tenth. In the race, I started well but at the first turn another rider literally pushed me off track, which saw me drop to the back. Although I couldn’t really push, I was able to make up some positions. I won’t be 100% at Valencia either, but I want to continue to make progress until I reach the point where I can exploit my TM’s full potential”. 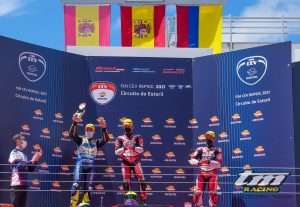 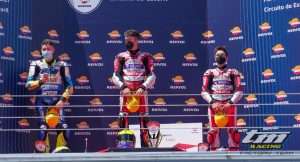 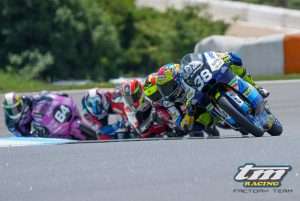 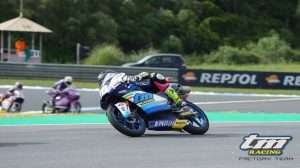 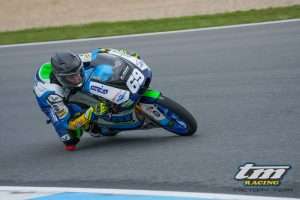 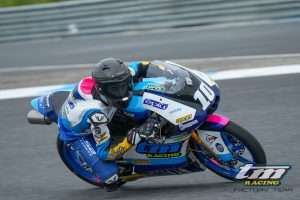