This author has not yet filled in any details.
So far admin has created 835 blog entries.

After an incredible season as an undisputed protagonist, , the young Andrea Verona wins the title of the E1 class at the GP of Portugal-part two.

Andrea Verona in both days of competition showed his state of optimal form and the final success was inevitable. The veneto-based rider is crowned world champion in the E1 class and also wins an amazing third place in the Enduro GP.

Good performance also for Loic Larrieu in the E2 class. Thanks to a fifth place in Day One and a fourth place on Sunday, the French rider climbed to the second step of the final podium of the E2 class.

“In these days before the race I tried to recover my strength and start off on the right foot at the last round of the season. Since Saturday I have tried to give my best in all the special tests and I managed to win both days of competition and take my third title with the team ”.

“The 2020 season did not go as expected, I would have liked to fight for the E2 title and also for the Enduro GP but it didn’t. The final result, however, is commendable, a second place in the E2 class which was very difficult and fought and a fifth place in the Enduro GP” 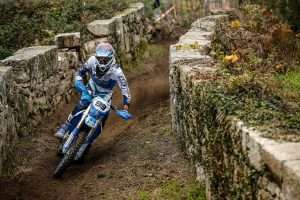 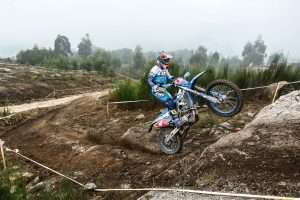 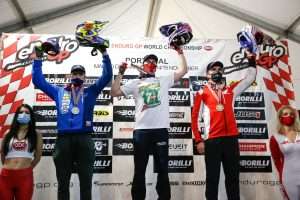 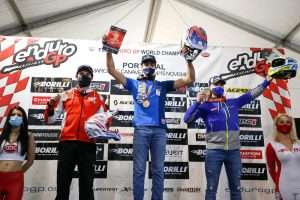 ANDREA VERONA PROTAGONISTS AT THE PORTUGAL GP IN THE E1 CLASS

On Saturday 7 and Sunday 8 November, the penultimate round of this particular and controversial 2020 season was held in the small Portuguese town of Marco de Canaveses in Portugal. Our Veneto-based rider Andrea Verona ran an excellent race going to win Day One in E1 and getting an excellent second place on the following race day. On the opening day Andrea Verona literally dominated the E1 class, winning and increasing the provisional classification of the class by a few points. On the following day with the special tests at the limit of practicability due to the heavy evening rains and frequent showers that fell during the day of competition, Andrea Verona made a few mistakes too many and unfortunately some crashes were fatal for the good outcome of the race despite many excellent times in the special tests. Andrea Verona currently still occupies the first provisional position in the E1 class, a position that he will try to defend with all his strength this weekend at the last round of the season which will also take place in Marco de Canaveses in Portugal.

Loic Larrieu, in the E2 class, did not shine as usual and his final score is a fourth place on opening day and a fifth place on Day2.

Next appointment again at Marco de Canaveses on Saturday 14 and Sunday 15 November.

“Saturday I would say a perfect race without too many mistakes and crashes, crowned with the first place in the E1 class. On Sunday, however, the three special tests were at the limit of practicability and making mistakes was very easy. Unfortunately I lost about 30 seconds in a special, losing the chance to fight for the first place ”

“I would say one of the most colorless weekends since I’ve been with this team. I have never been able to enter the race and have the right feeling with the three special tests. I hope next weekend to do much better ” 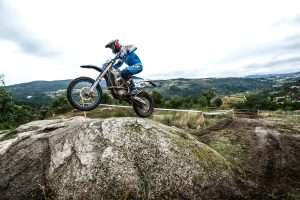 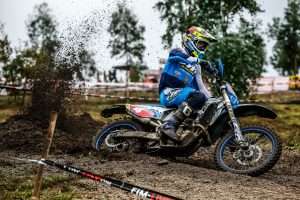 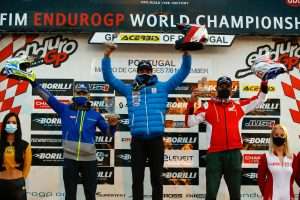 Last weekend the last two rounds of the Assoluti d’Italia di Enduro took place in Arma di Taggia, a Ligurian village a few kilometers from Sanremo. Motoclub Sanremo organized the race despite the enormous and severe limitations due to the pandemic that is gripping Italy.

A few weeks before the start of the double round, the paddock that INITIALLY was supposed to be in the port area was moved and subsequently the special test located on the beach of Arma di Taggia was moved at a couple of kilometers. In spite of everything, the organizers created an excellent race and even if access to the public was prohibited, everything was carried out with the utmost respect for the rules.

Only Andrea Verona showed up in Liguria who tried in every way to win the Italian title in the 250 4T class. The score in the two days of competition is two second places a few seconds behind the first in the 250 4T class and two fourth places in the Overall.

The Veneto-based rider ran an excellent race but without pushing too much and with his head already in the next two worldwide events.

Once the Assoluti d’Italia have been archived, the next two weekends will take place the last two world GPs in Portugal on the weekends of 6-8 November 2020 and 13-15 November 2020.

“Here at Arma di Taggia I tried to race thinking I would do better than my direct rival and hoping for a miracle to win the final title. At the end of the two days of competition I am satisfied with my performance and my state of form. Now we are concentrating for the double round of the Enduro World Championship ” 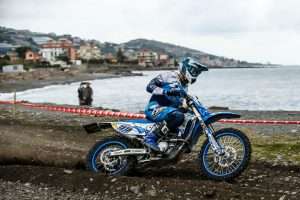 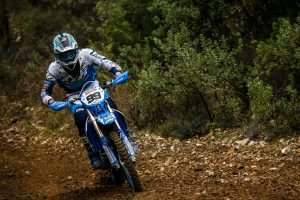 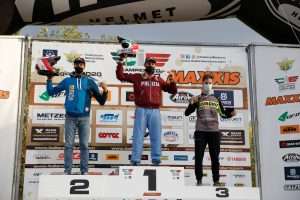 On Saturday 3 and Sunday 4 October, the fifth and sixth round of the Assoluti d’Italia di Enduro took place in Darfo Boario Terme, in the province of Brescia.

The TM Racing Factory Team lined up at the start the only Italian rider Andrea Verona while the rest of the team moved to France to participate in the French championship.

Bad weather hit Darfo Boario Terme from Friday, usually dedicated to technical checks, and then lasted for almost the entire duration of the opening day, bringing the special tests to the limit of practicability.

Andrea Verona was unable to express himself at his best on Saturday, especially in the Enduro Test where he was unable to set good times. The final score is a sixth place in the general classification and a second place in the 250 4T class.

On Day2 Andrea Verona ran an amazing race in all the special tests, setting excellent times. The final score is definitely better than that of the opening day with an overall second place and a first place in the 250 4T class.

Next appointment, Saturday 31 October and Sunday 1 November, in Arma di Taggia for the seventh and eighth round of the Assoluti.

“On Saturday I was unable to go fast in the Enduro Test because the heavy rain made the three special tests difficult due to too much mud. On Sunday, however, the special tests dried up and even if they were slippery I was able to express myself at best” 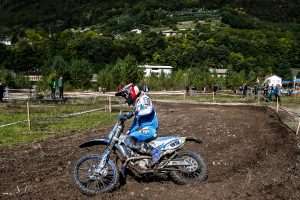 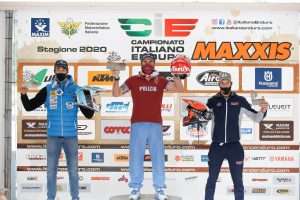 On Saturday 26th and Sunday 27th September the second act of the enduro world championship was held and the city of Spoleto hosted the Italian GP.

The TM Racing Factory Enduro presented itself in full force and at the home GP it lined up all its  three Bishops. In  the E1 and Enduro GP class the Italian rider Andrea Verona while in the classe E2 and Enduro GP the reigning champion (E2 class ) Loic Larrieu.

The new entry of the 2020 season is the Youth class rider Nathan Bererd, the young rider is gaining experience and confidence thanks also to the experience of team manager Luca Cherubini.

The race weekend was full of successes and podiums as usual and on both days of competition Andrea Verona and Loic Larrieu fought to the last centimeter of each special tests.

On the opening day Andrea Verona narrowly touched the victory in the E1 class but at the end of the race he had to settle for second place. Same result as his teammate for Loic Larrieu, the French rider took an excellent second place in E2.

In EnduroGP the best result was that of Andrea Verona, with an excellent fourth place while Loic Larrieu finished with the fifth position.

On the following day Loic Larrieu, with the special tests at the limit of practicability, ran an excellent race, managing to snatch the third position of the EnduroGP from the hands of his rivals. Excellent performance also in the E2 class for the French rider who closed the day with a well-deserved second place. Positive race weekend also for Andrea Verona who tried in every way to win both days but in the end he collected two second places that fit very tight.

At the moment Andrea Verona is the leader of the E1 class and in the next two GPs in Portugal the 2020 season will be decided.

In the Enduro GP Andrea has collected good performances, a fourth place on Saturday and a fifth place on Sunday.

The final score for our rider Nathan Bererd is a ninth and a sixth place in the Yoth class.

“Honestly, I am not fully satisfied with the results obtained at the Spoleto GP but so are the races. The pace is good and now we only need maximum concentration in the last two GPs of the seasonon.

“I am satisfied with the results obtained. I really liked the special tests because in all three you had to stay focused because you could lose a lot of seconds especially on Sunday. Day2 was quite challenging due to the heavy rains but I managed to get a good result and the podium in the EnduroGP

“A positive weekend and the final score grew. I want to thank the team for the wonderful job they are doing. 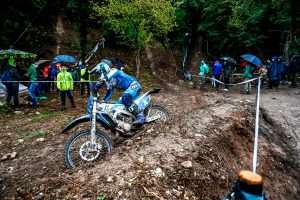 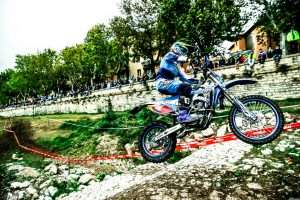 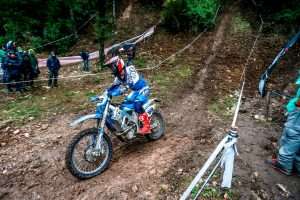 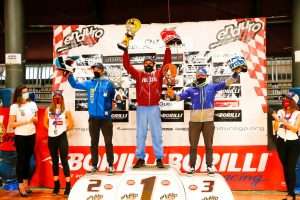 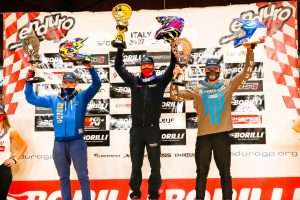