Internationals of Italy Supermoto Round 3 Busca

Third appointment with the Supermoto Internationals on the Piemontese Busca track, scorching heat put the drivers to the test after the low temperatures of the last few days.

Only 15 days ago on the same track the European Championship was staged under the universal flood, with the sun and high temperatures the Tm Factory Racing Team had to work hard to find the right set-up.

At the start of Race 1 Thomas moves his Tm at a red light not yet turned on by a few centimeters and the race direction has inflicted 15 seconds of penalty.

Chareyre at the start failed to take the lead and put himself in the wake of the leader, Thomas tried to get under the checkered flag but was unable to find the right and safe passage to take the lead. French also with the penalty ended in second place.

Monticelli at the start was thrown to the ground by an opponent, Diego left again and put into practice a great comeback, finishing sixth.

In the second race Thomas Chareyre immediately tried to start at the first corner but his opponent was good at closing the door. Chareyre in the first part of the race tried in every way to take the lead until a small mistake made him lose a few meters. Thomas has thus decided not to risk and to finish in second place.

Monticelli staged a great race, an incredible start that immediately led him to third place, Diego managed to keep an excellent race pace that earned him the third final position.

Alex Serafini Team Manager: “For us Busca has always been a difficult track and we have always struggled, but thanks to the great work of the Team we managed to stay very close to our opponents. Thomas tried to win but he knows very well what our goals are and on this track to try to overtake we have to take risks and there was no need to exaggerate. Too bad for Diego’s crash in race 1 that compromised his race. We continue to work to prepare for the next races. “ 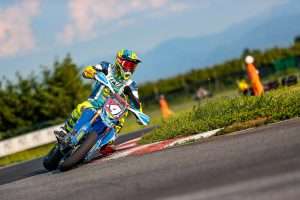 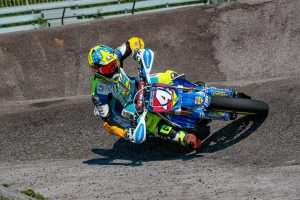 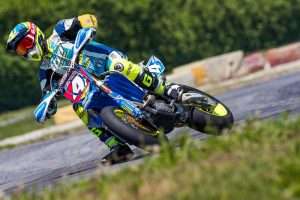 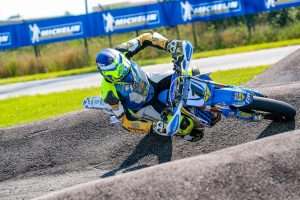 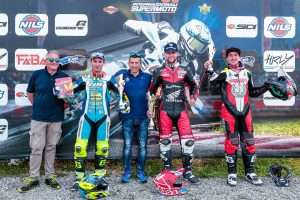