LARRIEU AND MCCANNEY PROTAGONISTS IN THE GP OF THE CZECH REPUBLIC

The TM Factory Enduro Team moved to Uhlirske Janovice after the summer break to compete in the sixth and penultimate round of the Enduro World Championship which took place on Saturday 14th and Sunday 14th September.

The TM Factory Enduro Team riders were protagonists of the race weekend and obtained several podiums in their respective classes.

In the E2 Loic Larrieu, fresh from contract renewal, obtained two excellent second places in the Czech Republic and at the end of the month the title will be played. Currently the official rider is only two points behind the leader, right in the home GP.

Great weekend for Dany McCanney who collects several podiums. In the E3 class the rider from the  Isle of Man gets two second places while in the Enduro GP two third positions.

After obtaining the title in the Enduro Junior class Andrea Verona presented himself at Uhlirske Janovice riding a two-stroke and with the white E1 class table.

The Venetian rider in agreement with the team decided to gain experience among top riders and try the two-stroke engine in an official race.   Once the Czech Republic GP is over, the TM Factory Enduro Team will have to head to French  where the last round of the season will be held on the weekend of 28 and 29 September.

LOIC LARRIEU
“The weekend started with the SuperTest where I lost for only 0.01 seconds. The following day I ran a good race, earning a few points on my direct opponent in E2. Unfortunately I couldn’t repeat myself on Day 2, a bad fall ruined my race but I managed to do my best. ”

DANY MCCANNEY
“On Saturday I started slowly but I improved  special after special. The race weekend was positive, I raced to the maximum of my possibilities getting the podium both in the Enduro GP and in the E3 class “.

ANDREA VERONA
“After the title won in the Junior class with the team we decided to start in the E1 class riding a TM 250 2T. The goal was just to try the two-stroke without pressure, in the end I enjoyed it and it was a positive experience “. 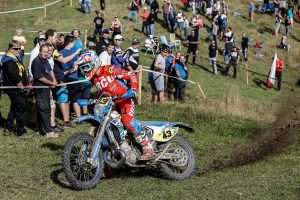 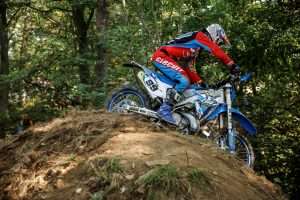 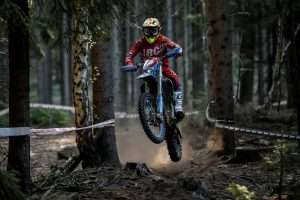 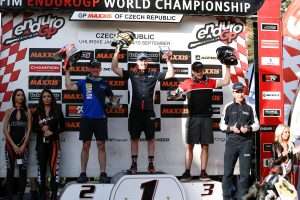 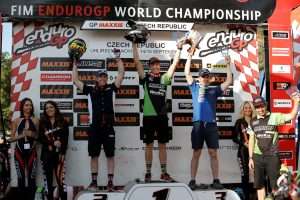