Skip to content
Home/Racing/MOTARD: TM RACING AND L30 RACING ON THE PODIUM OF THE FIRST ROUND OF THE WORLD AND EUROPEAN CHAMPIONSHIP IN ORTONA (CH)
Previous Next

MOTARD: TM RACING AND L30 RACING ON THE PODIUM OF THE FIRST ROUND OF THE WORLD AND EUROPEAN CHAMPIONSHIP IN ORTONA (CH)

The L30 Racing Team riding TM Racing m.y. 2021 arrives again in Ortona, this time for the opening round of the World and European Championships, immediately obtaining a record: getting on the podium of all classes.

In the S1 class, on the SMX 450 factory, the reigning champion Thomas Chareyre starts with the favors of the prediction, great debut also for Diego Monticelli who is well prepared for this first round of the championship, at the start also the new entry Patrick Pals.
In race 1 Thomas Chareyre starts in third place, joining the leading duo and managing to recover the second position on the ninth lap, finishing less than a second behind the winner;
Diego Monticelli started from fifth place and is the author of a regular race, which on the final materializes with the successful attack for the third place, meanwhile was a regular race for Patrick Pals who enters the top ten with the tenth place.
Race 2 is the “Fast race” formula, Chareyre concludes the race in third place, a position held from the first to the last lap, without taking any risk.
Monticelli starts immediately behind his teammate, keeping the fourth position until halfway through the race, and then finishing fifth.
More difficult race for Pals, who starts at the back of the pack, but recovering up to eleventh place.
In the Super final Chareyre always starts in third place and throughout the race he will express great speed, but not finding the space to attack the two opponents, a race that ended in a sprint with the third step of the podium. Monticelli instead is forced to recover, but his progression will take him from ninth to fifth place, an excellent recovery also for Pals, who makes a lot of overtakes until he reaches the finish line ninth.

In S2 class the two young riders of the team at the start: Luca Bozza and Steve Bonnal.
In race 1 Bonnal finds himself in fourth position on the first lap, immediately trying to force the pace, Luca Bozza is on his wheel, the two are authors of a race full of twists, with Bozza also able to occupy the second position for two turns; under the checkered flag Bonnal concludes third, while in fourth place Bozza.
In race 2 another excellent start for Bonnal, who immediately tries to force the pace from third place, in fact on lap six he is already in second position, keeping it up to lap thirteen, when a crash will unfortunately make him retreat to sixth position.
Bozza, who started in fourth position, will be able to get a great second place in the heats, conquering the third step overall.

Alessandro Sanchioni gets the win in S4 class, becoming the new championship leader, Vandi fourth puts in a good speed and accumulates precious points with the fourth place.
In race 1 Sanchioni starts well, keeping the third position, Vandi instead starts badly and is placed in fifth. A very hard-fought race for both, with a lot of overtaking on the opponents; to emerge will be Vandi, surprisingly managing to finish second, Sanchioni immediately behind him will finish third.

In race 2 Sanchioni improves the start of the first heat by placing himself in second place. A completely different race for Vandi: forced to recover, but struggling to find the rhythm with Ortona’s track.
Sanchioni will not give up the position and will finish in second place, winning the overall; Vandi after a linear race ends quarter of the heats and of the day.

IVAN LAZZARINI: “First round of the world championship just ended, it was a spectacular S1 class with Chareyre who dueled with Hollbacher and Schmidt, getting the second final place. Monticelli also went strong obtaining the fifth place overall, but proving in race 1 that he can go to the podium. Pals at the first race of the season got ninth place, we will use this first round as a starting point to work on the next stages.
The European Championship also gave us great satisfaction with Luca Bozza on the third step of the podium in his second continental experience, Bonnal got third place in race 1, but for him the crash in race 2 weighs heavily, a decent fourth place, but he will have definitely a way to make up for it.
As for the S4 class, an unexpected victory for Sanchioni, which never ceases to amaze us. Vandi also went fast, finishing close to the podium, a good fourth place for him.
We close the weekend with the red plate of the S4 European Championship and being the only team to boast the podium in all classes. Now let’s think about the next round of Visoke Myto on July 25th.” 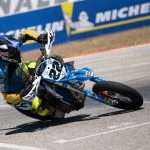 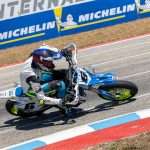 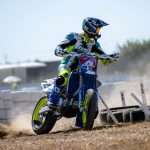 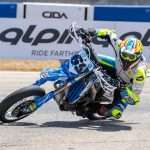 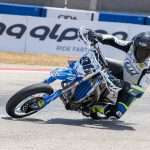