Great start for L30 Racing Team at its debut riding the brand-new TM bikes on the “Circuito Internazionale d’Abruzzo” track, for the first round of the Italian Supermoto Internationals held on 11 April in Ortona (CH).

In the premier class lined up on the 2021 SMX 450 factory are the reigning champion Marc Reiner Schmidt, Thomas Chareyre, Diego Monticelli and Luca Bozza that make his debut with the big names in the premier class.

In race 1 Schmidt starts in the lead, chased by Chareyre who immediately tries to put pressure on his teammate, the two riders take a big advantage in a few laps and give the race a great pace, until Schmidt’s error opens the way for a solitary ride of Chareyre who will celebrate the victory under the checkered flag.

Diego Monticelli’s performance was also very positive, starting fourth, but with great regularity he managed to snatch the third step of the podium by taking advantage of Schmidt’s error.

Luca Bozza faces the race with determination, but will be forced to retire after only two laps.

In race 2 the fastest are still Schmidt and Chareyre in order, Marc despite the pain in his hand manages to reach Chareyre, who follows him at a distance and controlling his teammate.

During the twelfth the fact: Schmidt falldown and Chareyre immediately must brake to avoid his teammate, but after the fall the two do not lose their positions, they start again and launch towards in the same order, without losing positions, Chareyre is therefore the winner of the day and new championship leader.

Monticelli continues the work done in race 1 with great regularity, he starts fifth in the second moto and will finish in fourth place in the heats and in the overall classification, climbing on the podium of the Italian classification.

Luca Bozza sprints well in race 2, entering the second group fighting with his opponents, concluding his debut with a sixth place in the heats.

In class S2 confirms his speed and his state of form Steve Bonnal who wins with full points and leads the overall classification.

In race 1 Bonnal took the lead immediately, setting an unstoppable pace for his opponents, leading the race from the first to the checkered flag.

In race 2 Steve repeats the start of the first moto, immediately taking the lead and dominating the entire race, Bonnal with 2 amazing races taking control of the overall classification, after having also obtained the S2 pole position in the morning qualifying session.

In race 1 Kevin Vandi sprints well, but on the first lap he has a spectacular crash that forces him to comeback from the last position, meanwhile Alessandro Sanchioni who immediately moves to second position, keeping it for most of the race and yielding only in the last laps, for Sanchioni the third place.

Vandi, on the other hand, will recover with determination and conviction up to eleventh place.

Papalini is also very well, starting in seventh position and after having dueled for a long time in the leading group, he will finish sixth.

Galloni starts well at his debut, he will collect nineteenth place after starting close to the Top Ten.

In race 2 Kevin Vandi finally has an awesome start in second place, a position he will maintain until the checkered flag, with a flawless race and recovering precious points.

Together with him on the podium in race 2 we also find again Sanchioni who, after starting in fourth position, will be able to reach third place not only in the race, but also in the overall S4 classification.

Papalini starts eleventh, but lap after lap he will be able to move into the top ten, finishing ninth and conquering the eighth place overall.

Galloni manages to conquer the fifteenth position finding a good feeling in the second race and adding his score to the excellent results of his teammates.

IVAN LAZZARINI: “This first race of the season ended well, even if it was very eventful, Kevin’s crash changed our plans a bit, but his comeback was really convincing. Sanchioni reached the podium in S4, good race also for Papalini and Galloni, who I remember is his first experience.

In the S2 class Bonnal did a masterpiece with the pole position and the double win, while in the S1 class Schmidt and Chareyre gave a big show, shame about Marc’s bad crash in race 1, but we will need experience about, Thomas was perfect in race management, meanwhile Schmidt won race 2, we are also satisfied about Luca Bozza at his debut, who, despite the crash in race 1 managed to ride well in race 2.

We greet Ortona with two red plates, we will be ready for round 2 of Ottobiano and we will try to conquer the red plate in S4 class” 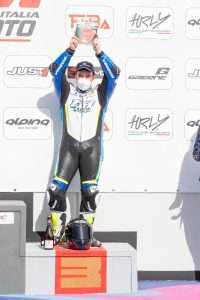 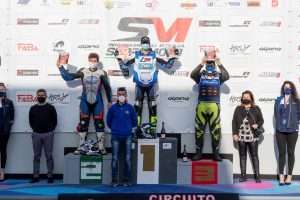 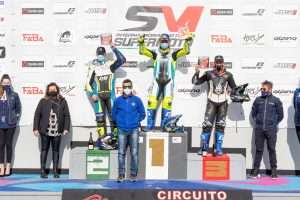 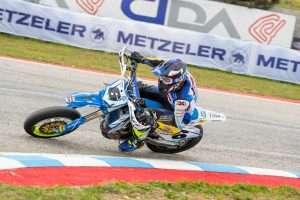 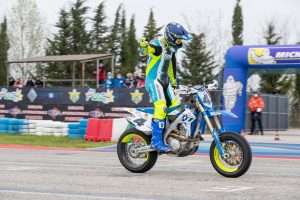 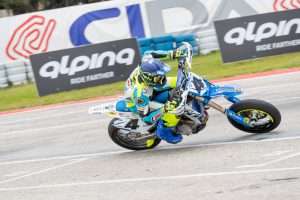