SCHMIDT KEEPS THE TOP OF THE WORLD CHAMPIONSHIP

MARC REINER SCHMIDT IS STILL LEADER OF THE S1GP CLASS, DESPITE A SUFFERING WEEKEND

The L30 Racing Team riding the TM Racing Factory m.y. 2022 is back in Italy for the third round of the S1GP Supermoto World Championship on the fast track of the “Sardinia Circuit”.
Marc Reiner Schmidt was victim of two crashes in the weekend, but the rocky German did not give up and still managed to maintain the leadership of S1GP World Championship.
For the reigning Italian Champion Elia Sammartin another positive weekend with 3 fourth places and the consequent fourth place in the championship standings, completed by the Estonian rider Patrick Pals.

In race 1 Marc Reiner Schmidt was quick at the start and immediately moved to second position, on lap four he managed to take the lead for 4 laps, until the pain forced him to give up one position, however, finishing in second place.
Elia Sammartin was the author of a good start, placing himself in fifth place and then conquering fourth place in the middle of the race, keeping it up to the checkered flag; Patrick Pals started eighteenth and then managed to finish with a good fourteenth place.
In Race 2 “Fast race”, Marc Reiner Schmidt crashed at the end of the warm up, but he still started in third place and on lap nine he moved to second position, conquering the second step of the podium at the finish line.
Elia Sammartin was the most regular: for him fourth place from the first lap; while Patrick Pals suffered a crash during the fourth lap, which forced him to finish in twentieth position.
In the super final Schimdt started in third position, keeping it up to the finish line and conquering the points necessary to maintain the leadership of the championship even if only by 2 points.
For Sammartin fourth place in the race and in the championship standings; Pals finished the super final in seventeenth place and eighteenth overall.

IVAN LAZZARINI: “It was a tough weekend, Mark’s crash during Superpole forced us to play in defense mode, the impact was quite important and it was not easy for Schmidt to run in pain, but despite everything we managed to keep it and complete 3 good races.
Positive note of the weekend is that we are still ahead in the world championship standings.
We are very satisfied about Elia Sammartin, who finished with 3 fourth places, proving once again to be the strongest Italian rider in this moment.
Now we will still work a lot to improve ourselves and avoid mistakes that put at risk the championship, next round will be on July 10 in Czech Republic on Vysoke Myto circuit.
Thanks to TM Racing and to those who support us.” 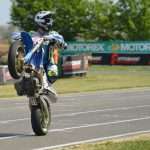 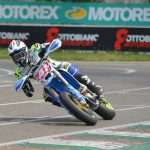 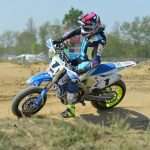 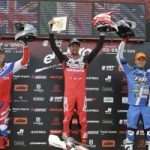 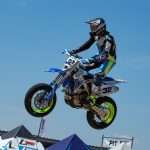 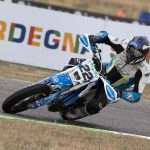