Another step towards the Title.

Penultimate race of the European Supermoto Championship was held in Forcarei in Spain, a track that hosts the discipline for the first time, for the occasion the race format took place all in a day that complicated the team’s work.

Thomas Chareyre presents himself at this World Champion race, won last month in Portugal, the Frenchman is going through a period of exceptional form and is demonstrating it this season. Diego Monticelli unfortunately appears at this race in less than optimal conditions, the knee injury has not yet healed 100%.

In qualifying Thomas once again proves to be the driver to beat, now there are no more words to describe what he can do on his Tm, Chareyre gets an amazing pole position. Monticelli fails to go beyond the ninth time.

At the start of race 1 Thomas made no mistake and immediately put himself in the lead of the group and thanks to an incredible pace in a few laps he managed to take a good advantage over his direct opponent who in trying to keep up with the Frenchman slipped. Thomas Chareyre wins the solo race. Diego Monticelli manages to improve the going to close in eighth place.

In race 2 another superb test for Thomas who manages to win without struggling, on this new track Chareyre has an extra gear and managed to find a special feeling by scoring excellent times that no other opponent managed to stand up to.

Diego Monticelli unfortunately, due to a crash, still beat on his knees in Portugal and had to retire.

A couple of weeks off and then back to racing at Sestriere, the city circuit, for the last act of the 2019 European Championship.

Alex Serafini Team Manager comments on the race as follows: “It was a really good weekend, it was not easy to manage this” all in one day “formula but we still managed in the best way both us as a Team and Thomas who has scored a great pole position and going on to win both races, Diego struggled a bit because of the knee he injured in Portugal and he is not 100% yet, in the second race he crashed going to hit that knee again, we hope that the two-week break will give him the chance to recover at his best for the last part of the season.” 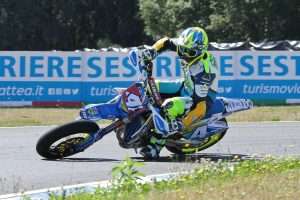 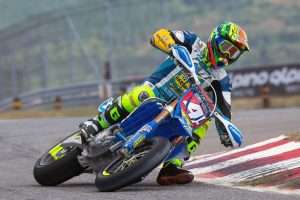 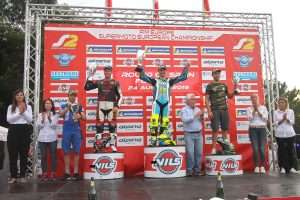