RUPRECHT SECOND OVERAL – PHILIPPAERTS WON THE 125 – CAVALLO AND PAVONI SECOND IN THEIR CLASS.

In the small village of Cavaglià, a few kilometers from Lake Viverone in the province of Biella, the third round of the 2022 Assoluti d’italia di Enduro took place on Sunday 10 April.

A beautiful sunny day, three demanding special tests and a path full of pitfalls made life hard for all the riders in the race.

The race course, designed by Motoclub Azeglio and approved by Track Inspector Mario Rinaldi, included a round to eight’s shape with CO in the paddock. The day of competition opened with the first special scheduled, an enduro test in a wood characterized by medium ground and with a duration of less than eight minutes. Then, a few hundred meters from the Enduro Test, the riders in the race had to compete with an insidious Extreme Test, located within the same wood and made particularly difficult by the presence of some rocky areas along the route. At the end of the race course a very fast and dusty Cross Test.

Excellent performance by Matteo Cavallo in Cavaglià, his final score is a second place in the hard-fought 250 4T class. The Piemonte-based rider recorded the best time in three of the four enduro tests scheduled and in all the other special tests he always defended himself very well, finishing in the Top Ten of the Overall with an encouraging ninth place.

In the 125 class Deny Philippaerts clearly dominated the third stage of the top Italian enduro championship, putting all his experience and tenacity on the field that led him to victory. Excellent performance also for Matteo Pavoni in the 300 class, the young rider from Brescia finished in second position and remains glued to the current championship leader in the provisional standings.

The Assoluti d’Italia now stop for a short Easter break and then resume and move to Colliano in the province of Salerno for the fourth and fifth rounds which will take place on Saturday 23 and Sunday 24 April. 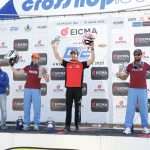 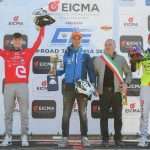