The third round of the Junior FIM CEV Repsol Moto3 World Championship has concluded today at the Circuito Barcelona-Catalunya in Spain.

These references meant that David Salvador lined up on the third row of the grid, Carraro from the ninth and Fusco from the tenth for the day’s two races.

In race 1, luck was not with David Salvador, the rider unable to start due to a technical problem with his bike. Fusco put in an excellent performance. Getting away well, Raffaele found a very fast rhythm that allowed him to climb from 30th to sixteenth place, just missing out on the points zone. Carraro also ran a good race, making up four places and finishing 25th.

The second race went a lot better for David Salvador, but again luck was not on his side. The Spanish rider made a good start and was up in the leading group. He battled for the win up until the final corners, when a rider crashed right in front of him, forcing him to slow and lose many positions, ultimately crossing the line eighth.

From row nine of the grid, Nicola Carraro was able to maintain a good pace and make up many places, eventually crossing the line twelfth and earning a few championship points. Fusco was particularly unlucky as, after a strong start, he collided with the bike of another rider who had crashed through turn 3. Although he was unhurt, he was unable to continue with his race.

The TM Racing Factory Team Moto3 will be back on track for the next round of the Junior FIM CEV Repsol Moto3 World Championship, taking place over the weekend of 3-4 July at the Autodromo de Algarve in Portimao, Portugal.

David Salvador Gomez: “In qualifying I was able score ninth on the grid and was confident for the race, but unfortunately during the warm-up lap a technical problem prevented me from starting. In race 2, I felt good and my bike was working well. I battled for the win until the final turns, when I was forced to brake to avoid a rider who’d crashed in front of me, meaning I finished just eighth. I’m really sorry because we could have scored a podium finish, but I’m pleased because we showed we have the potential to do very well”.

Raffaele Fusco: “Unfortunately I can’t find the right feeling with the bike and the tyre during qualifying and can’t be quick over the flying lap. The race pace is good, but without a good grid position the races become difficult. In the first, I came close to the points zone, while in the second I couldn’t avoid the bike of a rider who’d crashed ahead of me, and I literally flew into the run-off area, fortunately without hurting myself”.

Nicola Carraro: “It’s been a positive weekend, but it could have been better. In qualifying I couldn’t get into the right group to exploit the slipstream and set a good lap time. Starting further back on the grid, I had to play catch up in the races, and in the end I scored a few points but we showed that we can aim for much better results. We’ll try to do better at Portimao”. 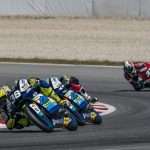 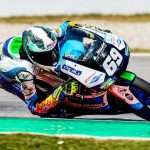 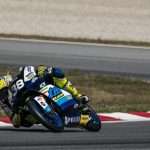 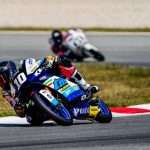 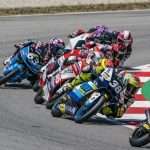 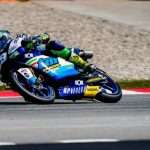