In yesterday’s qualifying, David Salvador scored tenth position with a time of 1’49”115, closely followed by Raffaele Fusco who stopped the clocks on 1’49”199 to finish thirteenth. Nicola Carraro, having never raced at the Portuguese track before, struggled to find the right feeling with his bike and finished thirty-first with a time of 1’50”222.

These results meant that Salvador started from the fourth row, Fusco from the fifth and Carraro from the eleventh for the ten-lap race.

Salvador made a good start but, despite his best efforts, he was unable to find the necessary rhythm to stick with the fastest riders and finished tenth, scoring important points for the championship, in which he now places fourth with 52 points.

Raffaele Fusco also completed a solid race. He started well and was running close to the front until he was forced to complete a long lap, the result of a penalty Race Direction had inflicted during FP2. Re-joining the race at the back of the field, the young Italian was able to climb back up to sixteenth place, just one away from the points zone.

From the eleventh row of the grid, Carraro also did well to make up a number of positions and cross the line in twenty-third place.

The next round of the Junior FIM CEV Repsol Moto3 World Championship will take place over the weekend of 24-25 July at the Motorland Aragon circuit in Spain.

Raffaele Fusco: “I’m pleased with my race. I started well and stuck with the leaders until I had to complete the long lap that I’d been given in practice. I was consistently fast and set some excellent lap times. I’m pleased because, together with the team, we did a great job and I’m sure we’ll score some strong results in the next races. Without the long lap, I’m sure I could have fought for a podium today”.

Nicola Carraro: “My race was definitely conditioned by my starting position. I’d never raced here at Portimao before. The track is beautiful, but it doesn’t suit my riding style and so in qualifying I couldn’t do more than thirty-first. I got away quite well from the eleventh row and made up many positions, before closing twenty-third. It’s not the result I was hoping for, or what the team and me deserve, but I’m sure we’ll do better at the next Motorland Aragon round”.

David Salvador: “It was a complicated weekend, at a track where we had few references. I only qualified tenth, mainly because there was one sector of the track where we struggled to be competitive. I started the race knowing I didn’t have the best pace but thinking I could stick with the frontrunners. I gave it my all, to not lost contact with the leaders, but I never found good feeling with my bike and so we had to settle for tenth place. Both me and the team did our best and so I’m sure we’ll do better in the next races. We now have three weeks to prepare for the Aragon round, a track where I feel comfortable and where I’ll be aiming for the podium”. 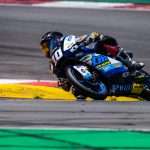