On Saturday 19th and Sunday 20th September the first round of the enduro world championship took place after several months of inactivity due to the ongoing health emergency.

Requista, a small town at the foot of the Massif Central, hosted the first round of the 2020 enduro world championship and the three special tests designed by the organizing moto club were quite demanding, especially after the rain fell on Saturday night.

Our riders distinguished themselves at the French GP and both Andrea Verona, in his first experience among top riders, and the reigning E2 champion Loic Larrieu shared podiums and victories in the EnduroGP and in their respective classes.

In EnduroGP, our two riders climbed to the lowest step of the podium on both days of competition. Loic Larrieu on the opening day picked up the third place in front of his audience while Andrea Verona climbed the podium of the EnduroGP for the first time after a very hard-fought day.

For the Veneto-based rider Andrea Verona the start of the season in the E1 class was excellent, with his splendid double  at the moment he is the leader of the E1 class with full points.

Reigning E2 class champion Loic Larrieu raced in front of his audience but failed to give a victory to the TM Racing Factory Enduro. The final score of the French rider is two second places.

The enduro world championship will stop in Spoleto this weekend for the Italian GP.

“I am extremely happy for the double win in the E1 class and especially for the podium obtained on Sunday in the EnduroGP. For me this was my first weekend among top riders and I have no words to describe my happiness for these victories and podiums. ”

“The enduro world championship has finally restarted, along with all the competitive activities after a long and exhausting forced stop. The race weekend did not go very well but I am satisfied with the results obtained ” 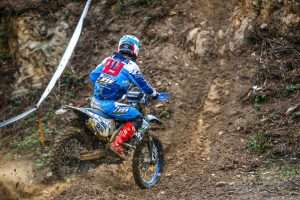 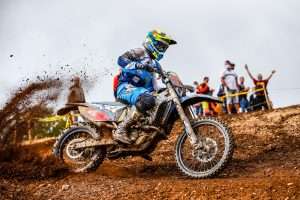 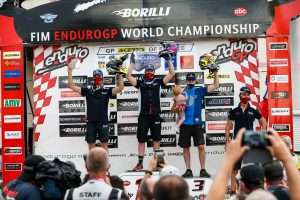 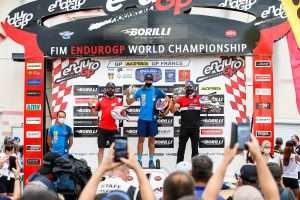